As the AWI team traveled the nation, real estate agents became excited about giving back and asked for a way to get involved. This led to the development of the “Lead the Way 5K,” which was spearheaded by Ben Lunak – a recipient of a grant for his fitness business.

The “Red Friday” campaign was kicked off, challenging thousands of individuals to wear red on Friday to “remember everyone deployed.” $22 is donated for each red shirt worn and the money goes to the funding of local initiatives. The number is also a symbolic way to honor the 22 veterans who take their own lives every day.

More than just changing lives in 2015, AWI became about SAVING lives as several veterans testified that the gift they received – whether it was a service dog or 12 months of rent paid on their behalf –actually SAVED their lives.

In 2016, the journey continues with more CMRS Boot Camps across the country and several new campaigns driving awareness and raising funds for veteran programs, including the purchase of service dog companions for veterans suffering from PTSD.

The first of these campaigns, 22 for Warriors, is a national awareness campaign being driven by social media. Participants are challenged to do 22 pushups a day for 22 day and donate $22.

Additionally the Lead The Way 5k campaign launched in May and will see pledge-driven 5k runs across the country throughout the year. Proceeds at each 5k will go to a local veteran in need. 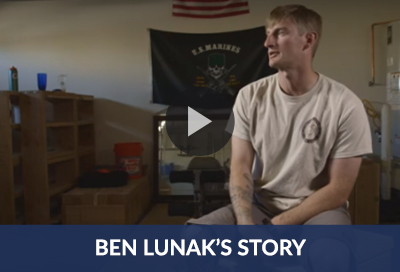 Ben Lunak’s devotion to serving his country came to an abrupt halt on February 25th, 2006, when his Humvee was struck by a roadside bomb resulting in a below-the-knee amputation. Paralyzed by the memories of his experience, Lunak turned to alcohol. “I drank so much, I don’t remember much from my early 20′s, says Lunak.” After being introduced to the physical and emotional healing powers of strength training, Lunak gained a newfound passion. This journey led him to understand that he could still serve his country by encouraging others to achieve their goals in spite of adversity. Lunak opened ZV Strength, where he trains athletes, youth, and veterans. As an Ambassador for AWI, Lunak travels the country sharing his story to inspire veterans. 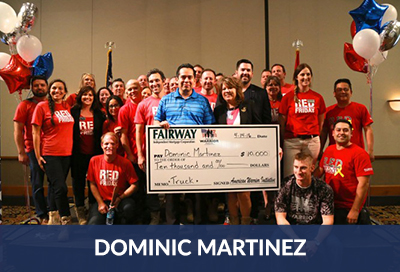 In April 2016, Phoenix, Fairway Independent Mortgage Corporation branches collaborated with the American Warrior Initiative (AWI) to host a “Boot Camp” event and honor a local U.S. veteran. At the event, over 500 real estate agents received training to educate them on working with the home purchase needs of active duty and military veterans.

Dominic Martinez, a wounded Purple Heart recipient suffering from PTSD, was presented with a check for funds to purchase a truck that is capable of hauling wheelchairs and other necessary equipment for others with no transportation. Martinez works with the Honor House in an effort to help other wounded veterans and will be able to use the truck to help veterans go to doctor’s appointments or come to events.

Louise Thaxton, director of Fairway’s American Warrior Initiative and the Military Mortgage Specialist Division commented,“AWI and Fairway are grateful to this veteran for his service to our nation. He is a true hero and we want to honor him for that service. Through these events we are hoping to inspire others to do whatever they can to give back to our wounded heroes.” 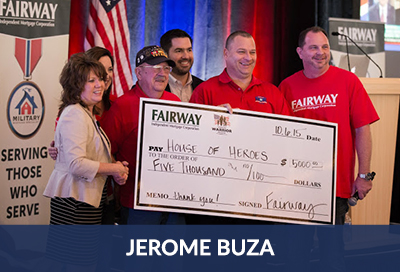 Giving back to those who served our country is one of the most important things to all of us at Fairway Independent Mortgage Corporation. In October 2015 in Chandler, Arizona, several area branches hosted a Boot Camp where the American Warrior Initiative presented a Certified Military Residential Specialist training.

At this event, Fairway honored Jerome Buza, a Vietnam veteran with a military career spanning several decades. Buza and his wife live in a Phoenix home that is in crucial need of repairs they were unable to afford.

Our goal was to raise $10,000 for the MANA (Marines, Army, Navy, Air Force) House. At the start of the event we had raised $7,000 of that goal, but after announcing we had missed our goal, everyone in attendance donated on their way out and we raised the additional $3,000 to hit our goal!

MANA House is the transitional housing facility for the Madison Street Veterans Association. At this location, we provide 53 clients with everything they need to get back on their feet, including: